Joanna Swainson has worked for a number of different London based literary agencies, including Darley Anderson Literary, Film and TV Agency, and Christopher Little Literary Agency, where she met Caroline Hardman. They set up Hardman & Swainson in June 2012, with eighteen authors. In September 2014 they were joined by agent Hannah Ferguson. Hardman & Swainson now represent 60 authors across a range of genres of fiction and non-fiction. More info at www.hardmanswainson.com 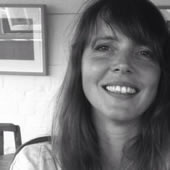 1. Does the rumor that agents get extremely excited over plucking a gem from the slush really exist?

It’s very exciting to find a gem in our submission. The excitement comes in different shades: there’s a quiet excitement when you read something and can’t stop and feel you’ve got something special. That excitement strengthens as you begin to think about editors that would like to read it too. Once you know it’s something you want to represent there’s the thrill of signing the author. Then there’s nervous excitement when you come to submit to publishers. I think the funnt gif shows the out and out happy excitement of when an offer comes in from a publisher. But that’s strictly between the four walls of the office! Generally speaking, finding a gem in submissions leads to much excitement in many different guises.

2. Are you a hands-on agent with your authors, editing-wise?

Working editorially with authors and helping to knock a manuscript into shape is one of the most interesting and rewarding parts of this job. Working out what works and why, where a manuscript falls short, which aspects need strengthening etc – it’s endlessly fascinating. The job of editing can take many forms from a few simple suggestions to quite a full on rewrite. It depends on the state of the manuscript. It’s not my job to edit it to death, but to take it to the point where I feel it’s ready for submission – hopefully an editor will then have a vision for it and want to buy it!

3. You keep an open mind about the types of submissions you’d like to receive because you never know what will excite you—which is totally awesome! But, is there something that you’d like to see in your inbox that you haven’t seen yet?

I feel like I’ve seen everything! But our submissions inbox never fails to amaze me. It’s incredible how many people are writing works of fiction and non-fiction, and what they come up with. The key thing is whether what we see is good enough. As you say, I’m open to most things, but it has to be a real sparkler, brilliant of its kind. It’s a very tough market so we have to feel confident about what we’re taking on.

4. The agency website suggests that authors in the US might be better served with an agent in the US, unless there’s a compelling reason for a UK agent. So, would you say that you aren’t totally against receiving submissions from a US author, but they should include a reason as to why they believe they need a UK agent to represent them?

We’ve put this note on our agency website because we were getting a lot of submissions where it simply didn’t make sense to have a UK-based agent. So if, for example, the novel is about baseball – which isn’t a big thing in the UK – or has a particularly American theme, it doesn’t make sense for us to take on this novel unless we’re confident it will straddle the two markets (often very difficult to predict). Our aim is always to sell in the UK and, where appropriate, in the US (and indeed worldwide) but we’re usually thinking about our own market in the first instance. But never say never – we just think US authors should think carefully why their novel or piece of non-fiction would work better, or equally well, with a UK agent. If the author can articulate that, I suppose this also wards off the idea that sometimes creeps into the back of your mind as you’re reading – that all US agents have been exhausted, so that’s why they’ve submitted in the UK.

5. Personalization in a query is often debated. Do you prefer someone to tell you upfront why they are querying you, or get straight to the story their submitting? Has personalization ever made you feel an author was stalking you?

It depends what you mean by personalisation. I think with query letters it’s just good to keep it fairly short and sweet, professional and to the point. Obviously if I met you at a writers conference or some other do, then absolutely jog my memory. I’ll likely be thrilled to hear from you. The only time I’ve ever felt stalked is when we were left some creepy packages on the doorstep over a period of a few weeks. I think it was meant to build up excitement to the arrival of the manuscript in the final package, but all it did was have me double locking the door and quaking with fear.

6. There are authors who spit a MS out based on what’s trending, and others that simply write what they want to read. Any advice/feelings on either route chosen?

Don’t follow trends. What makes most sense to me is write what you’d like to read. Publishing isn’t exactly known for its speed so if you follow a trend, by the time it gets to the agents / editors, the chances are it’ll be done and dusted by that point and everyone will be sick of seeing the same old, same old.

Thank you, Joanna, for taking time to answer my questions. Joanna has been kind to offer a first page critique, even with her busy schedule! (Yay!) This is open to everyone (English written) and Joanna reserves the right to ask for more material if she’s interested in your project. The contest will be open for one week, ending at midnight on March 30, 2015. The winner will be announced on an update to this post. Good luck!

Congratulations to CATHERINE MILLER, winner of the First Page Critique!