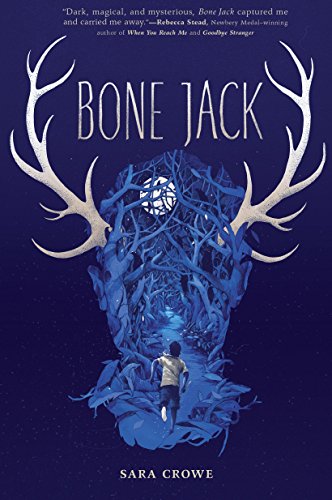 It’s with great pleasure I announce Bone Jack by Sara Crowe is being released in the United States on February 7, 2017. I originally interviewed Sara in June of 2014 regarding Bone Jack in the UK. However, the US link on that interview goes to the Book Depository for the UK version. BUT…now you can get the US version with a brand new cover design. And doesn’t it look fabulous?

Times have been tough for Ash lately, and all he wants is for everything to go back to the way it used to be. Back before drought ruined the land and disease killed off the livestock. Before Ash’s father went off to war and returned carrying psychological scars. Before his best friend, Mark, started acting strangely.

As Ash trains for his town’s annual Stag Chase—a race rooted in violent, ancient lore—he’s certain that if he can win and make his father proud, life will return to normal. But the line between reality and illusion is rapidly blurring, and the past has a way of threatening the present.

When a run in the mountains brings Ash face-to-face with Bone Jack—a figure that guards the boundary between the living world and the dead—everything changes once more. As dark energies take root and the world as he knows it is upended, it’s up to Ash to restore things to their proper order and literally run for his life.

If you would like to learn more about Sara, visit her on twitter or Instagram. She is a wonderful photographer, as well. So check out all she has to offer!

If you live in the United States, be sure and enter the (Closed) for a free copy of the US version of Bone Jack! (Yes, this is for U.S. only, sorry guys.) As always, good luck!

It’s true. I’m a sucker for great cover art. I’ll pass over a book without reading the blurb if the cover doesn’t lure me to pick up the novel. With a blackened figure of a young boy wearing antlers on his head , BONE JACK by Sara Crowe made me want to know in what type of world a boy would have them on his head.  Then I read there were ghosts in this story about a stag boy and I love ghosts!

Ash’s dad has returned from war. But he’s far from the hero Ash was expecting. He’s close to a breakdown, lost in a world of imaginary threats. Meanwhile, Ash’s best friend Mark is grieving and has drifted away into his own nightmares. Ash’s only escape is his lonely mountain running, training to be the stag boy in the annual Stag Chase.

But dark things are stirring. Ghostly hound boys prowl the high paths, and in the shadows a wild man watches. Ash begins to wonder if the sinister stories about the Stag Chase are true. Could Mark and Dad be haunted by more than just their pasts?

The first paragraph promised danger in the pages to come and I devoured the entire book. Therefore, I reached out to the author for a little Q and A. (Read full interview.)